How virtual reality could change the real estate landscape

By: James Bombales | from an article in BuzzBuzzHome on NOVEMBER 16, 2015
TwitterFacebookEmai 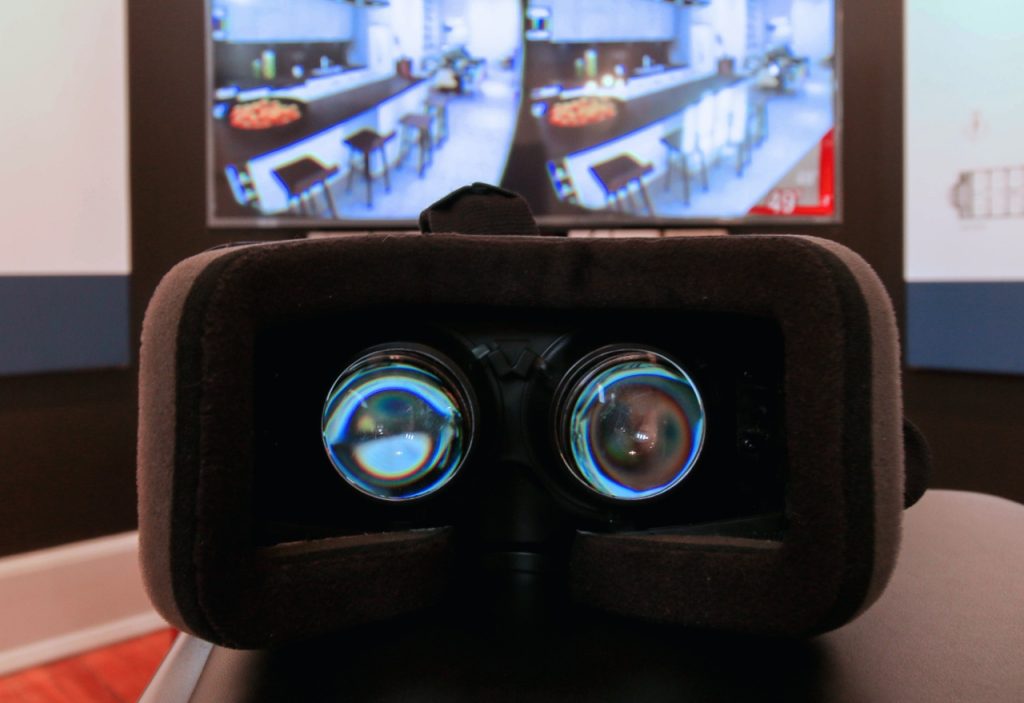 On the cover of Time Magazine’s August edition, a barefoot Palmer Luckey is seen frolicking on a beach with a set of virtual reality goggles on his head. Goofy stances aside, the 22-year old is poised to change the world of virtual reality with the Oculus Rift, when it launches its first consumer version in early 2016.

The Oculus Rift is a VR headset developed by Luckey after raising $2.4 million in one of the most successful Kickstarter campaigns ever launched. It’s since become one of the biggest names in virtual reality. In 2014, Luckey sold the company to Facebook for over $2 billion and it now operates as a separate entity within the Facebook portfolio. Working out of Facebook’s Silicon Valley headquarters, Luckey is now known as the “Founder” of Oculus and continues to be involved with the day-to-day operations in a grander role as the face of virtual reality. 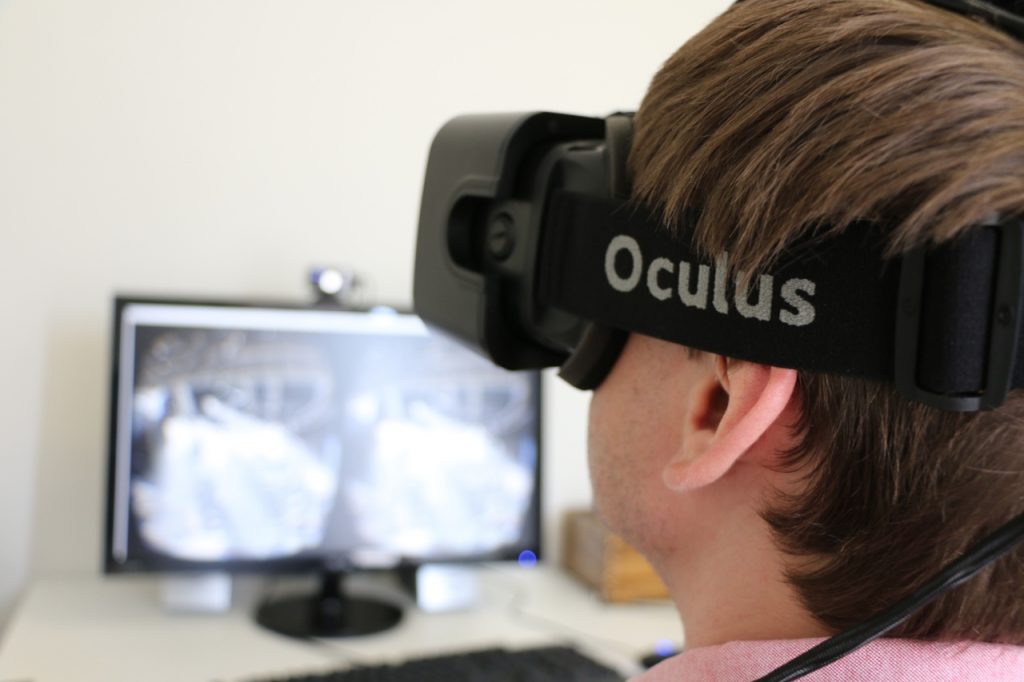 VR technology has come a long way since the days of the Nintendo Virtual Boy and the Sega VR of the 1990s. Using modern technologies including advanced computer processors, 3D audio, and OLED screens with high refresh rates, today’s VR devices — like the Oculus Rift, HTC Vive and Sony PlayStation VR — deliver a completely immersive experience with a wide field of vision and ultra-low latency head tracking.

Although video games are expected to be a key application for these devices, there is a lot of potential for the technology to revolutionize other industries when consumer versions of all three devices are released in the first quarter of 2016.

In real estate, this means homebuyers could have the ability to tour multiple properties from anywhere in the world, from the comfort of their own homes or at their realtor’s office. The VR headsets would allow them to experience the homes in significantly more detail that they would have ever been able to do through pictures or virtual tours alone.

“I can lead a VR tour remotely and even see where the client is looking,” said Hood in an interview with Fortune Magazine. “[This] allows me to address things like a kitchen counter style while they’re looking at it — just as I would in a real world tour.” 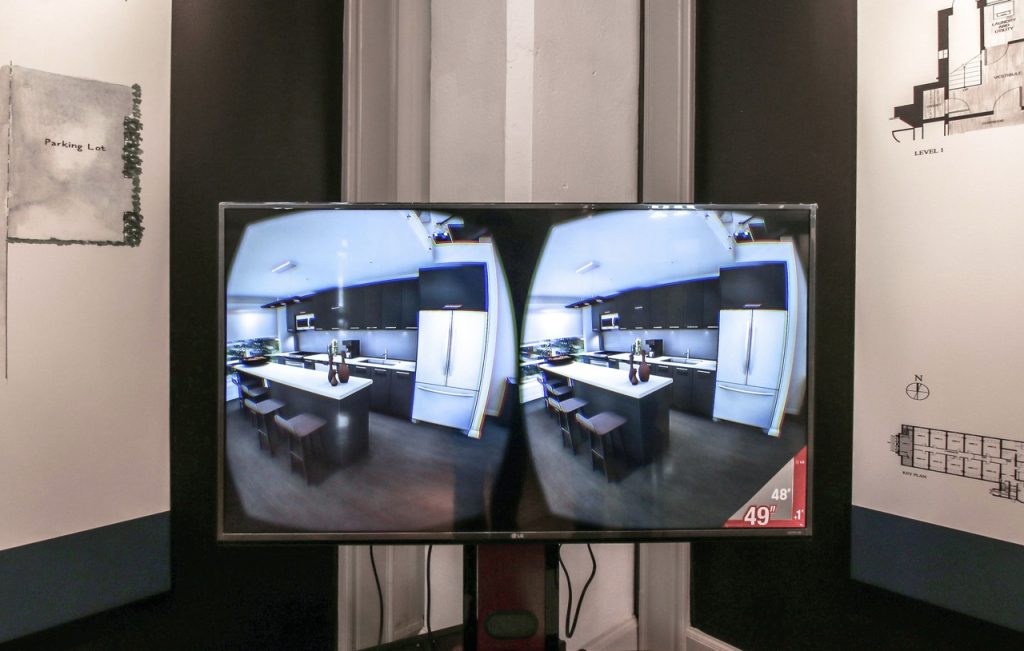 Touring resale homes isn’t the only use for VR in real estate. Imagine being able to walk through a home or condo that hasn’t even been constructed yet. Traditionally, when someone walks into a sales centre for a new construction development, they’re presented with two dimensional floor plans and images. For many people it is very difficult to visualize what the home will look like once it’s been constructed. Virtual reality can help solve that problem by allowing prospective homebuyers to gain a better understanding of the space, layout, finishes and dimensions. They can even see first hand what the views out of a window are like or have the ability to visualize how a certain hardwood floor or granite countertop would look in a finished kitchen.

Most residential developers currently rely on model homes, 2D floor plans or 3D renderings to showcase their homes and condos. But it’s not always possible to build a lifesize showhome or model suite at a presentation centre, especially for smaller homebuilders given the cost and space requirements.

Developer Lifestyle Custom Homes has already made the jump into virtual reality, hiring Invent Dev, an interactive studio, to design and operate an Oculus Rift inside the sales centre of One6Nine Jones, a new townhome project in Toronto.

“With virtual reality, a customer can put on the headset and actually feel like they’re inside the home,” said David Payne, CEO of Invent Dev. “They can walk around, look around, explore and fully understand the layout and dimensions and even see the different finish options with the click of a button.”

Instead of trying to understand a 2D floorplan, customers will be able to experience the layouts for themselves in a 3D environment, without the need for a physical model suite.

“It’s a win-win for developers,” explained Payne. “Customers have a better buying experience and have more confidence to make a decision, while developers can now reduce or even eliminate the need for a model suite.” 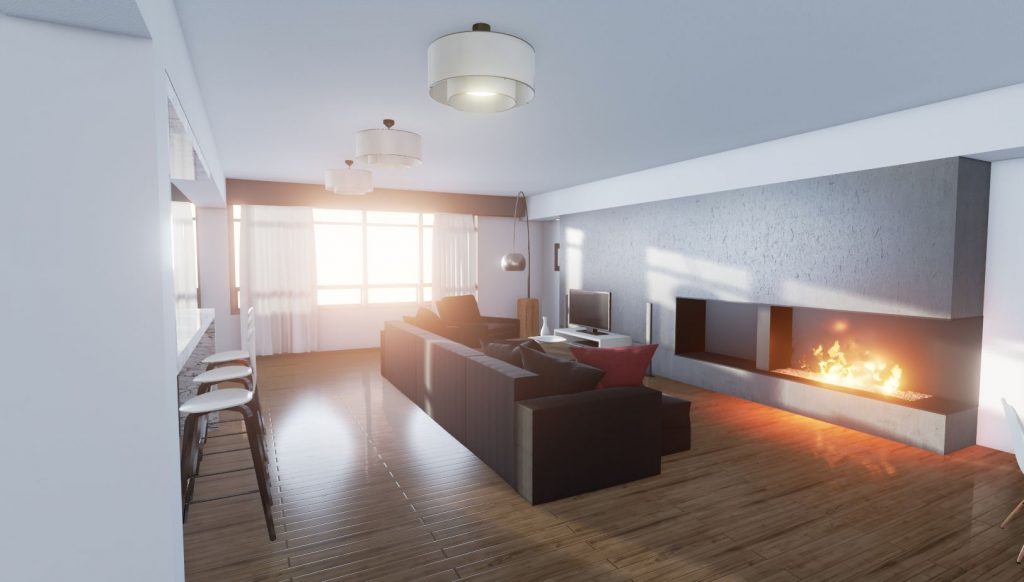 The use of virtual reality inside sales centre can also play a role in attracting tech savvy clients and younger demographics, many of which are in the market for their first home or condo.

“I think it really says something about a condominium when the developer is up-to-date with technology,” said Jenna Siciliano, Managing Director of The Interactive Abode, a Toronto-based software studio.

Siciliano’s company develops software products that enable homebuyers to customize and decorate their homes in 3D.

“If [developer’s] have an Oculus Rift headset in their sales centre, the customer will say, ‘How cool is that? What kind of technology are they using in my condo building if they’re using the latest technology here?” she told BuzzBuzzHome News in a recent interview.

For condo buyers, VR also allows them to preview parts of the building like the amenities and common areas that they wouldn’t normally be able to see until the building is well into construction.

“We see this technology having the ability to mobilize any type of virtual tour to give homebuyers a more immersive experience,” said Tim Ng, founder of Adhoc Studios. “Most presentation centres only have space for one model suite, but with a virtual tour, we can model the party room, terraces and other amenities to allow more flexibility on what the users can see in the development.” 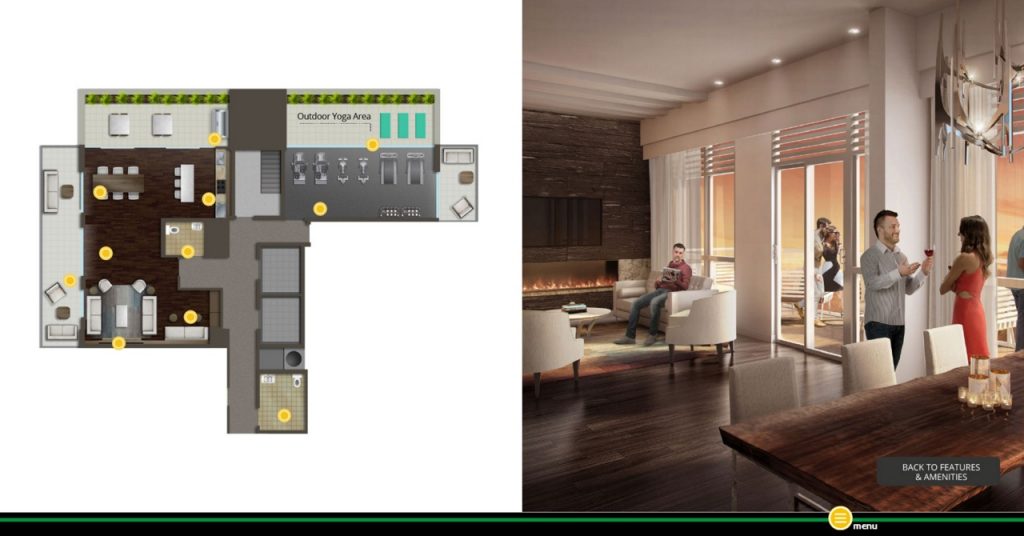 While he acknowledges the potential of VR in the home building industry especially for new construction condominium projects, Ng doesn’t believe developers will rely solely on VR anytime soon. Instead, he sees the technology as a complement to presentation centres and showhomes.

“You’re always going to want that tactile feel in the buying process so there’s always going to be some clients that want to go into a sales office and tour a model suite,” said Ng. 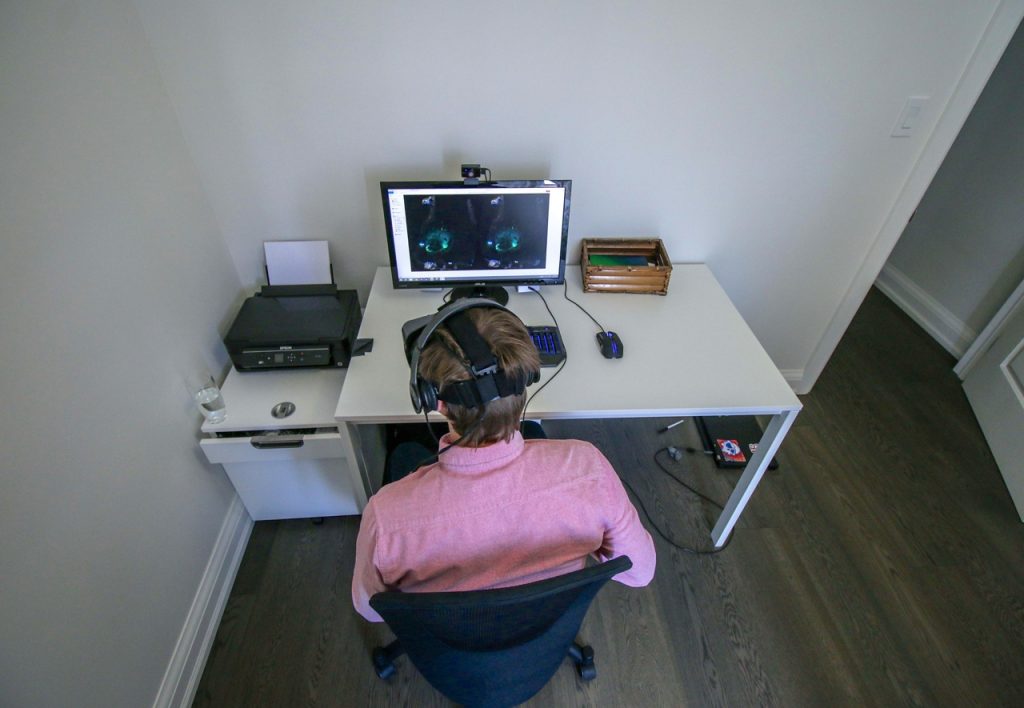 In addition, before any VR device can go mainstream, developers have to address the issue of motion sickness. According to Ng, three out of the four people who tried the Rift alongside him experienced a feeling of nausea or disorientation as a result of the lag between their physical head movements and the virtual image displayed in the headset.

“From our perspective the software is already there, and at this point a lot of computers can power the 3D graphics well enough, so it’s mainly the hardware that needs to catch up,” said Ng.

Another barrier for virtual reality is the social stigma, learning curve and comfort level of people wearing VR goggles in public places.

“We were one of the first to roll out touchscreens at sales offices six or seven years ago and there was a lot of push back on how to interact with a touchscreen,” explained Ng. “People were questioning whether touchscreens could replace print boards or brochures so we have a feeling that VR headsets are heading towards the same direction.” 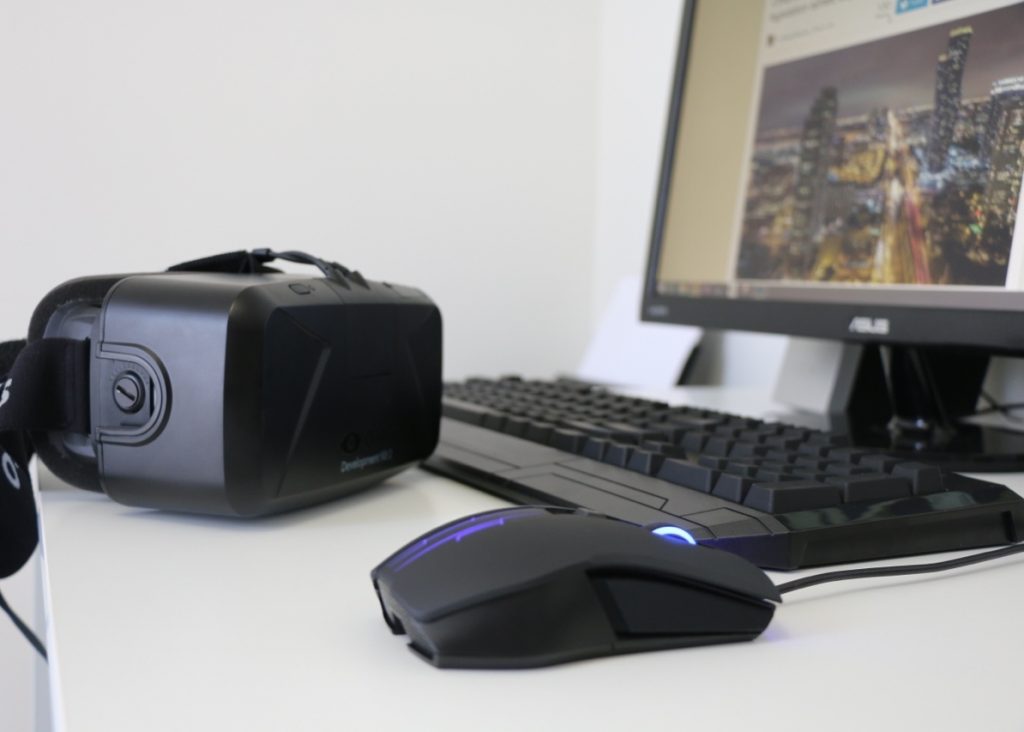 While the demand for VR devices may initially be fueled by gaming software, the interest from software developers in other industries hints at the potential of the technology reaching far beyond video game applications. Devices like the Rift are already being used in real world situations today, albeit in pre-production form. However, with consumer versions of the Vive, PlayStation VR, and the Rift scheduled to be released early next year, 2016 is expected to be a significant year for the technology.

“The recent attention to and investment into virtual reality is helping to revitalise the industry, and with major brand commercial launches imminent, there is huge potential for rapid market expansion,” said Joe Crabtree, co-author of Virtual Reality: Market Dynamics & Future Prospects 2015-2020, a report published in September by Juniper Research.

Furthermore, industry experts predict a boom in sales of virtual reality devices with BI Intelligence forecasting shipments to reach 25 million by 2020, translating to a $2.8 billion hardware market. However, even with these predictions, Adhoc’s Ng believes widespread adoption in real estate won’t happen overnight.

“I think it will eventually become more common like touchscreens, but I don’t think VR will fully replace model suites within the next three or four years.”

Find My Dream Home
What's My Home Worth?
Help Me Relocate